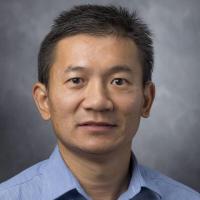 Consider a linear model Y = X + z, z N(0; In). Here, X = Xn;p, where both p and n are large, but p > n. We model the rows of X as i.i.d. samples from N(0; 1 n ), where is a pp correlation matrix, which is unknown to us but is presumably sparse. The vector is also unknown but has relatively few nonzero coordinates, and we are interested in identifying these nonzeros. We propose the Univariate Penalization Screeing (UPS) for variable selection. This is a screen and clean method where we screen with univariate thresholding, and clean with penalized MLE. It has two important properties: sure screening and separable after screening. These properties enable us to reduce the original regression problem to many small-size regression problems that can be tted separately. The UPS is eective both in theory and in computation. We measure the performance of a procedure by the Hamming distance, and use an asymptotic framework where p ! 1 and other quantities (e.g., n, sparsity level and strength of signals) are linked to p by xed parameters. We nd that in many cases, the UPS achieves the optimal rate of convergence. Also, for many dierent , there is a common three-phase diagram in the two-dimensional phase space quantifying the signal sparsity and signal strength. In the rst phase, it is possible to recover all signals. In the second phase, it is possible to recover most of the signals, but not all of them. In the third phase, successful variable selection is impossible. UPS partitions the phase space in the same way that the optimal procedures do, and recovers most of the signals as long as successful variable selection is possible. The lasso and the subset selection are well-known approaches to variable selection. However, somewhat surprisingly, there are regions in the phase space where neither of them is rate optimal, even in very simple settings, such as is tridiagonal, and when the tuning parameter is ideally set.

We appreciate your financial support. Your gift is important to us and helps support critical opportunities for students and faculty alike, including lectures, travel support, and any number of educational events that augment the classroom experience. Click here to learn more about giving.

Every dollar given has a direct impact upon our students and faculty.