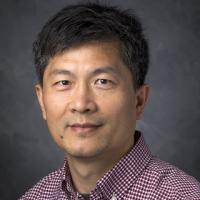 The desire to infer the evolutionary history of a group of species (species tree) should be more viable now that a considerable amount of multilocus molecular data is available. In this talk, I will introduce three statistical methods for reconstructing species trees under the multispecies coalescent model. The Bayesian method can estimate the topology, species divergence times, and population sizes of the species tree, but involves intensive computation. The other two methods estimate species trees based on summary statistics of gene coalescence times and thus have computational advantages, though the two methods can only estimate the topology of the tree. It can be shown that these methods are statistically consistent in estimating species trees. Empirical and simulation studies suggest that all three methods are useful in understanding the evolutionary history of species.

We appreciate your financial support. Your gift is important to us and helps support critical opportunities for students and faculty alike, including lectures, travel support, and any number of educational events that augment the classroom experience. Click here to learn more about giving.

Every dollar given has a direct impact upon our students and faculty.